Midsummer Scream 2019 had no shortage of panels and live podcast recordings filled with horror fan favorites. Continuing their recent run of fantastic live recordings, The Shock Waves podcast crew gathered to deliver some horror fun to their listeners.

Of the usual four members of the podcast, Rebekah McKendry, Rob Galluzzo, and Elric Kane were in attendance. With Ryan Turek on a special film assignment elsewhere (or in “Haddonfield” according to Rob) there was a fourth seat open for a guest. The gang invited special guest Axelle Carolyn to join the panel. Axelle is known for her work in front of and behind the camera and her writing, but she was invited onto the show for her expertise in hauntings.

While normally the podcast goes over what movies each host has been watching recently, this panel took a different approach. In what was one of the more crowded panels I attended, the Shock Waves crew decided to reveal their top 5 favorite haunting films. To be clear, these are their favorite haunting films, not necessarily the haunting films that scare them the most. Fitting in with their respective personalities, Rob explained that he provided his list and doesn’t even really remember what he picked while Rebekah produced an entire PowerPoint presentation for the panel.

Before diving into their lists, the hosts went into some examples of haunting films and what makes them so popular. Rebekah explained that haunted house stories written by authors such as Mary Shelley were responsible for making haunting tales popular in the United States. The interest began in Victorian times and only continued to grow. This has always been a popular subgenre of horror and Elric believes this is because hauntings and ghosts are one of the few supernatural things that can’t definitively be disproven. He even recounted a chilling experience his family briefly went through.

Hauntings are also something that people fear across cultures and every country. Axelle’s first feature was about a haunting and she has even written about ghosts and hauntings. She describes some of the tales she came across in her research and how various “tropes” in haunting horror have been around since ancient times.

Some of the tropes the hosts went over are how it’s often a family entering a new home. This can be seen in Sinister, Poltergeist, Insidious, etc. These families are also typically bound to this place for financial reasons. They also talk about some of the films that break that mold such as The Others and Paranormal Activity.

The rest of the live podcast recording focused on the top 5 for each panelist, starting with the 5th favorites and ending with everyone’s favorite. I’m surprised and impressed that the four hosts managed to get through their respective lists within the hour-long timeslot they had to host the panel. To hear what each of them chose and the reasons behind their choices, you will have to listen to the full process. I will say each host had great lists and I now have a slew of haunting films I added to my “must watch” list. I’m sure you will too.

“Episode 156: Our 5 Fave “Haunting” Movies with Axelle Carolyn!” of the Shock Waves podcast is now available on iTunes, Stitcher, podcast.blumhouse.com, and anywhere else you listen to your podcasts. 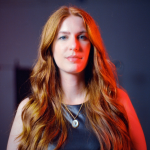 Molly has been writing about horror films for various outlets since 2015. In November 2018 Molly earned an MA in professional creative writing, which she plans to use to write her own horror fiction and horror film screenplays. When she’s not writing, Molly enjoys spending time with her husband and numerous fur babies. Be sure to follow her on Twitter (@BloggingBanshee) and Instagram (@blogging.banshee).