The word ‘cheesy’ has been the bane of my existence for as long as I can remember. Hair metal? Cheesy. Slasher movies? Cheesier. Eddie Murphy’s ‘Party All The Time’? CHEESIEST! I am going on record now to state that these things are not cheesy – Cheesiness doesn’t exist. Some of us just like to have a lot of fun, and it isn’t my fault that you don’t understand fun! Which is exactly what DEAD TEENAGER SEANCE is, and I am still not totally over how much I enjoyed it.

Humour me for a moment and imagine what the final product would be like had John Hughes directed Night of the Demons and you’ll have something strikingly similar to DEAD TEENAGER SEANCE. The characters were quirky caricatures, not unlike a more exaggerated Breakfast Club, only they’re all dead. The self-aware humour sealed the coffin for me, namely “Are we stupid teenagers?” – Honey, if you’re in a horror movie the answer is automatically yes!

Hear me out – Every horror movie, big or small, can’t be a shot of whisky and why would you want it to be? We all know how satisfying a cold beer on a hot day is, and that is exactly what DEAD TEENAGER SEANCE functioned as for me. It was light, it was breezy, it was fun – And it was damn good filmmaking. I was enamoured with every single character because these are all caricatures of people I’ve known – Hell, I’ve even dated the goofy headbanger type more than once in my lifetime.

Doubling back to my initial point, there truly are no weak links in this chain. The set design was delightfully boisterous, not only fitting the atmosphere perfectly but deeply contributing to it. Oh, and it also features a head explosion that could rival Scanners to top it all off. I mean… What more could you really ask for? 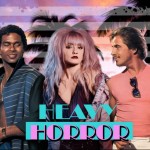 Breanna is a freelance writer with an undying love for horror and heavy metal. Growing up in an isolated city in Northern Alberta, Canada, much of her childhood was spent planted before a tv screen consuming the works of John Carpenter and Wes Craven. Fascinated by things that frightened her since viewing The Exorcist at the ripe age of five years old, she became hell-bent on viewing as many movies possible — A habit that would follow her through maturation.