As most of you know, February is Women in Horror Month, celebrating the many, many talented women in the horror industry, on and off the screen. From writers to directors, to actresses and artists, these countless women help bring what we love to life, and the characters we see before us. Below I have comprised a list of my ten absolute favorite fictional female horror film characters (in no particular order), who demonstrate nothing short of badassery, intelligence, and strength in their portrayals on the silver screen.

1. Clarice Starling – Silence of the Lambs

One of my favorite serial killer crime thrillers, Silence of the Lambshouses the character of Clarice Starling, one of my favorite Jodie Foster roles. Starling is independent, intelligent, and strives for success in her heavily male-dominated career field. As a character, she represents a strong lead, with some of the best on-screen chemistry between protagonist and antagonist in film history.

This is such a great film, from its impressive production and sound design to its mysterious character development, with Mia Wasikowska as India Stoker stealing the show. India represents a complexity of emotions, ranging from sadness to strength, and curiosity mixed with comprehension. She is a character that isn’t afraid to take life into her own hands.

This wild woman is a force to be reckoned with, and shows her strength in this brutal and almost revenge-based horror film. This is a movie that raises a lot of great points towards sexism and the mistreatment of women, with a very violent and satisfying ending to boot.

5. Tiffany – The Bride of Chucky

The Bride of Chucky is one of my favorite films in the franchise solely based on its ridiculousness, fun horror atmosphere, and the introduction of the lovely but deadly Tiffany, played by Jennifer Tilly. Let’s face it, we’ve all been in love with an asshole, and Tiffany is no exception. She’s just a little more assertive when it comes to letting that special someone know how she really feels in the heat of the moment – usually with sharp objects.

Definitely one of the most enjoyable John Water’s film, Serial Momportrays a not-so-average housewife with murderous tendencies. This movie is chock-full of gruesomely funny death scenarios, and showcases the legendary Kathleen Turner as serial killer Beverly Sutphin. Just remember to never wear white after labor day.

Black Christmas still remains to be one of the great holiday horror films of its time. There’s so much I love about this movie, with the protagonist Jess being at the top of the list. She’s a very strong female lead for a 1970s slasher, showcasing her stance towards her convictions and doing what is best for her, despite her controlling boyfriend’s input. She is also one of the only women in the sorority house who isn’t a drunk airhead, and keeps her wits about her through the film’s entirety.

I don’t think enough can be said about actress Jamie Lee Curtis and how amazing she is. Her portrayal as Laurie Strode throughout the Halloween franchise (with the first film being the best) demonstrates a character who will do whatever it takes to protect herself and the people around her, despite how terrifying and dangerous her surroundings are. She’s the babysitter you’d want to have when a masked murderer comes knocking at your door.

Sigourney Weaver also stands strong as being one of the best powerhouse female actresses around, with her portrayal as Ripley being my ultimate favorite. This is a character that never gives up, and looks death in the face without thinking twice. She’s constantly up against out-of-this-world forces, and men who love to dismiss her input. But she remains to be a total badass every time and can really pack a punch.

I feel writer Ira Levin created one of the most relatable fictional characters of all-time when he wrote Rosemary’s Baby back in 1967. His ability to depict the subtle progression of being gas lit is spot-on, and Mia Farrow really brings that character and her struggles to life on screen. We as women have all been in Rosemary’s shoes at least once (probably more) in our life time. That feeling of knowing something is wrong but being constantly denied is so relatable, with Farrow making it feel very natural and terrifying. Levin’s story really depicts the struggles of being a seemingly helpless housewife in the 60s, with Rosemary following her instincts to unravel and pursue the truth she knows is happening around her. 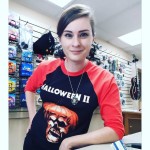 Abigail is a macabre and horror artist, primarily working in oil paints and found objects, and does freelance writing for both Nightmarish Conjurings and Pophorror. She loves all-things horror, animation, and art history, and is currently working on her first dark stop-motion animated horror short film, Cadillac Dust. Abigail is also very passionate about music, having used to play the banjo, guitar, and sing in a band called The Killer Pines. When she’s not either painting, writing, working, or watching movies while doing all of these things, she’s probably sleeping, or cuddling with Claude the cat (or both).