Marcus (Jared Cohn, PERNICIOUS) is your typical scummy dude with a bad attitude who’s looking for easy money.  Him and his girlfriend, Stella (Victoria Curtain), find it in the form of a map that leads them to a marijuana crop in the remote Alaskan wilderness.  Set off on their expedition with Stella’s sister, Lydia (Ardis Barrow), what should have been an easy job turns deadly when Stella goes missing and they uncover the Native American myth that could be behind her and many others’ disappearances.

This was a tough one, y’all.  With an interesting sounding concept I was hoping that Max Perrier’s FEED THE DEVIL was going to be a fun, little flick.  Unfortunately I was met with mostly unlikable characters, a shaky script, and sluggish pacing.

I think my main and biggest issue with FEED THE DEVIL were the characters – particularly Marcus. I understand that he’s meant to be an unsavory type of fellow, but if he’s your lead, and someone that us viewers should be feeling some type of connection with, I’d hope for some redeeming qualities at least.  And this is more of a script problem, but when every other word that came out of Marcus’s mouth was a very hearty “FUCK” or variation of the word, it tends to take away from my interest in whats going on.  It’s not really a swearing issue (trust me, I’m like a sailor) but it just felt super unnecessary and came off distracting. Plus, I probably could have done without the racist lines in the film.  Everyone else in the film did a well enough job, including Barrow as the tag-along sister, considering she gets about as much screen-time as Marcus does.

Whether Perrier was going for it or not, I did appreciate the “cannibal movies from the 70’s” vibe I was getting in the last act.  There were some gross-out moments in those scenes and was a nice change from the kind of crawling pace of the movie.  The pacing was something I mentioned earlier that was a bummer for me; it creeped along for me despite the fact that there was never much down time for the characters.

The cinematography was actually pretty good, but they severely underutilized the beautiful landscape they were shooting in (I believe it was Canada?).  We mostly had shots of the interior of the woods, but when we finally saw a sprawling bit of land and a river, I wished there was more of it.

I might be a little bit more forgiving than usual just because it’s only Perrier’s second feature film and first horror, I do think some people will find something in FEED THE DEVIL to enjoy, but for me, I think the bad is going to outweigh the good on this one. 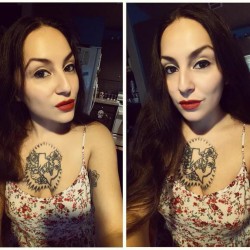