They say don’t meet your heroes, and yet when I was faced with the opportunity of a set visit for GOOD BOY, the Judy Greer-starring June edition of Into the Dark, well, I jumped on it immediately.

The day began arriving at a nondescript warehouse, deep in the valley. Of course, it was a lot more iconic than I even realized. As we were ushered into a classroom for the interview portion of the day, we discovered we were sitting in one of the sets for MTV’s Teen Wolf.

Cue The Breakfast Club-esque day in detention footage – except instead of different genres of teenagers, it was more like a room full of adult horror nerds. It certainly was a horror nerd’s dream, as we were lucky enough to be on set during the final kill scene.

We watched the script supervisor hard at work, as stunt coordinator Tim Mikulecky made sure everything involving the prop gun was safe and above board. He explained that every gunshot was actually just a burst of Co2. Even so, he made sure that all of the camera operators were okay and a safe distance away.

He also told us about one of the more difficult stunts in GOOD BOY. “Well, we had a nice, little drag yesterday. We had some rigging to pull, we pulled our actress [censored to save spoilers],” he said. “We probably dragged her 15 feet, simulating her getting dragged by the demon dog.”

“I’ve been calling it ‘la chupacabra.’ But right now it’s just the demon dog. She performed excellently. It was great, and when anyone walks away from ABC Stuns 101, it’s always a wonderful thing,” he added.

As we continued to watch them prepare and film some of the final scenes of Into the Dark‘s GOOD BOY, director Tyler MacIntyre (Tragedy Girls, 2017) gave us a rundown of the story. See, Maggie (Greer), like all of us right now, to be honest, is suffering from anxiety. Her doctor (not unlike my own) recommended an emotional support animal – specifically, a dog.

But this is a horror movie, after all, so there’s something a bit off about Maggie’s new support dog, Reuben (Chico the Dog). It’s kind of like a monkey’s paw, or “careful what you wish for” kind of story, as while the dog does help alleviate the stressors in Maggie’s life… it’s only because he kills anything that causes her anxiety.

After getting the lowdown on the movie, the script supervisor showed us some footage from the previous day’s filming. I won’t spoil which character met their untimely demise, but what I will say is, it is bloody.

It was cool being on set and seeing how in sync the Into the Dark crew was. At one point, someone called in a member of the crew whose brother is a cop, just to be sure their actor was holding a gun properly. That kind of attention to detail is actually really appreciated by horror fans like myself.

Probably the funniest image from set that I can leave you with is what they called, “Edward Bottlehands.” Just because a scene calls for the monster breaking down a door, doesn’t mean “the monster” is the one to actually do it. One of the resourceful Into the Dark members had attached bottle openers to the fingers of a pair of “bloody” gardening gloves.

That was how they created the stomach-churning scene of a bloodthirsty creature bursting through Maggie’s front door. Of course, there is a lot more that goes into moviemaking, but the trivia lover in me can’t help but remember fun, little tidbits of information like that.

It’s also hilarious to note that we were able to meet Chico the Dog who is, in actuality, the goodest boy ever. At one point, he sat pretty in a director-style chair, looking over the labeled back of the chair at his trainer. A true Hollywood pup.

I realize I cheaply led with the Judy Greer name drop but now is where that finally comes to play. We got to interview my absolute favorite sidekick (who deserves more leading roles). It was a bit of a career dream come true to break out of her sidekick status for the lead in this heartfelt and out-of-control concept.

Let me just state for the record: There was absolutely nothing disappointing about it. Greer is as hilarious, good-natured, and talented as you would imagine (and yes, we got to see her in action for a bit).

“When I got Mary, I had always had big dogs, and I really wanted a small dog, ’cause I travel so much and I get so lonely and homesick. I wanted to have a pet I could take with me, and who could be a companion for when I travel,” Greer told us.

“That’s not the case with her, because she’s so awful to everyone that I can’t let anyone take care of her. If she bites someone, they’ll totally sue me. So I can’t really take her with me when I go places, so she’s not emotionally supportive for me,” Greer admitted, laughing. “In fact, she stresses me out so much, because of her nature… I feel like I am her emotional support human.”

Emotional support humans aside, Into the Dark has consistently been cranking out memorable horror films in a shockingly small time frame. Having been on set, I can now confirm that the series is also produced by a dedicated and supportive staff. Everyone felt like they were on the same team, working together to create the best content possible. It makes me happy to be a fan.

Bottom line is, I cannot wait for everyone to see GOOD BOY. What better way could there be to celebrate Pet Appreciation Week? (Well, aside from adopting a pet – or donating to a reputable animal organization). GOOD BOY, from Hulu and Blumhouse Television, hits Hulu on June 12. Watch it with your favorite, four-legged friend! 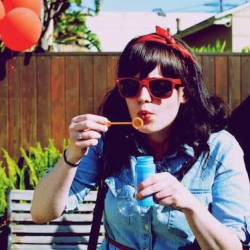 [Listicle] Reasons To Keep An Open Mind About the LABYRINTH Sequel

[Article] How Art and Horror Are Helping Me During the Pandemic

One thought on “[Set Visit] Into the Dark’s GOOD BOY”