I had high hopes for BLOODY BALLET after watching the opening scene and the subsequent credit sequence — the opening score and the color palette deliver dashes of synth beats and neon lighting a la The Strangers: Prey At Night that I am simply just a sucker for. Unfortunately, BLOODY BALLET decides that it doesn’t want to fall under the category of a straightforward slasher film. Normally that would be just fine, but BLOODY BALLET bounces around without true intention, making for a disappointing, disorientating viewing.

Before I really get into the meat of the movie, I just want to say that if there’s one particular way to describe BLOODY BALLET, it’s that it’s certainly a wild ride. Ambitiously co-written and directed by Brett Mullen, the film follows (presumably) a dance troupe that’s being stalked by a mysterious masked slasher that’s got a real Alice, Sweet Alice vibe injected with a healthy dose of Black Christmas thanks to her penchant for eye-gouging. I say presumably because unlike dance-troupe-focused predecessors like Black Swan and Suspiria, we don’t see a lot of ballerina bonding or even much conflict between them. In fact, most of the scenes rarely ever feature more than two actors engaging with each other at a time, which makes following the plot progression extremely hard to do. To top it all off, every single woman in this movie is a thin, moderately attractive white woman with blondish/brownish hair. Needless to say, I struggled to initially remember who was the main focus of the film and not just slasher bait. I didn’t struggle for long, as nearly all of the women who end up dying at the hands of our masked madman conveniently take their tits out just before being stabbed to death — as is slasher tradition.

I think I got away from the plot here. Oh, right. Most specifically, the film follows Adriana, a ballerina who has just secured the lead role in the Nutcracker, as is every dancers dream. She’s struggling with nightmares that she eventually believes are coming true. We see a janitor-type guy with a creepy burned face at her rehearsal space. Then this fucking guy shows up to investigate an insane asylum (????):

Yes, about ten minutes in, BLOODY BALLET turns into a straight-up Ghost Hunting At Ye Olde Insane Asylum special, complete with a haggard groundskeeper who warns whatever this fucking guys name is not to bother the ghosts, ‘A word of advice? They don’t know they’re dead. So don’t be asking them all these stupid questions like you’ve been pestering me with. And don’t talk to the children, they will follow you home.’

So let’s regroup here. Within the first fifteen minutes we’re served a snowy shot of a child being picked up by police, some eyeless dead bodies slumped at a table, a dance practice, a therapy session, a creepy burned-face guy, and now we’re in an old insane asylum talking about some ghosts that don’t know they’re dead. Okay.

The movie continues on this jumbled trajectory, bounding from slasher scenes to Adriana dealing with her nightmares, then back to the insane asylum — where Adriana is assumed to be a ghost? The final arc of the film attempts to provide clarity: Spoiler Alert! Adriana was the murderer all along! But even as delightfully gory as the ending is, BLOODY BALLET is overwhelmingly incoherent overall.

On a positive note, watching BLOODY BALLET forced me to google “Can you immediately die from having your eye cut out?” And now I know a little bit of trivia to creep people out at parties! 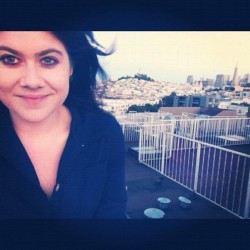