Nightmares Film Festival Review: I AM THE DOORWAY (2018)

I AM THE DOORWAY was an excellent, chilling short film based off Stephen King’s short story of the same name. The story was released in King’s first collection, Night Shift, in 1978. The 20-minute short film was probably one of the better adaptations of a King story I have ever seen.

I am a huge Stephen King fan and a snob when it comes to adaptations of his work, but this film exceeded my expectations. I AM THE DOORWAY only had a budget of roughly under $20,000 but excellent directing and acting coupled with believable effects made for a great film. Simon Pearce directed I AM THE DOORWAY and Simon Merrells starred as the main character Arthur, Grant Masters played Arthur’s friend Richard, and Maurice Cooper was “the boy.”

I AM THE DOORWAY is about a former astronaut, Arthur, who, upon crash-landing back to Earth after orbiting Pluto (in King’s story the astronauts were orbiting Venus), discovers he has contracted a sort of alien parasite. The parasite is using his body as a doorway to Earth.

Arthur is telling his friend Richard about a boy the aliens made him kill. Arthur has his hands wrapped in cloth to cover them. We get a flashback to Arthur in his home shortly after returning to Earth and he discovers a sort of sore on his palm. Upon further examination, and some probing of the sore (this scene was a little cringy), he reveals a grotesque eye.

Richard coerces Arthur to tell him about the boy. Arthur, sitting in his wheel chair on the beach, sees a young boy walking, and they wave to each other. When Arthur waves, the eye on his hand sees the boy and detects a threat. At this time, Arthur has multiple eyes on each hand. Here we get a view from the alien hand eyes perspective. The screen is read and there is a screechy whistle noise. The boy’s face is distorted, and his eyes look like empty black sockets. The alien eyes are not happy and summon a bolt of lightening to explode the boys head.

Upon hearing this, Richard begins to feel disbelief and asks Arthur to unwrap his hands. Arthur does, and the hand eyes (which have only increased in number) see Richard as a threat. Richard suffers the same fate as the boy. Arthur, so disturbed by this event, douses his hands in gasoline and thrusts them in a bonfire.

The film ends with Arthur in his home, recording a suicide note on his phone. We see he now has hooks for hands and reveals the eyes have spread to his chest. Arthur puts a shotgun in his mouth. In King’s story, this ending is alluded to, but not written. I thought it was a great addition and the final scene before the screen cuts to black is even better. Sends a little shiver up your spine.

Overall, I AM THE DOORWAY was a great short film, I highly recommend you check it out and read King’s story too. My only qualm is the movie was too short! 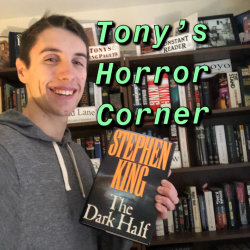