Igniting the Fire: Revising ARE YOU AFRAID OF THE DARK (Season 1 Episodes 1-3)

If you grew up in the 90’s with a fascination for horror, then there’s a pretty good chance that your free time was spent immersed in Goosebumps books and Scary Stories to Tell in the Dark. If it was a Saturday night, it was probably spent in front of the TV watching Nickelodean’s Snick, a two-hour block of television featuring a giant orange couch that introduced the world to Clarissa and the horrors of Ren & Stimpy.

While the latter certainly scarred a generation with its meticulously detailed animation – I think we all remember what Ren’s teeth look like – the show that would ultimately introduce thousands of kids to the horror genre would be ARE YOU AFRAID OF THE DARK?, a Canadian anthology show that allowed those a chance without HBO to get a taste of what Tales from the Crypt had been scaring up for over a year.

Creating by DJ MacHale, author of the young adult series Pendragon, ARE YOU AFRAID OF THE DARK? brought together the Midnight Society; a secret club of story tellers who dabbled exclusively in ghost stories and tales of terror. Every episode, one of five to seven kids (the cast fluctuated throughout its almost ten year span), each with their own distinct personality, would tell a scary story that tested the boundaries of adolescent fear. Ranging from vampires to whispering walls, episodes hit a wide range of pop culture references, allowing viewers the chance to peak into some of the horror genres most beloved films.

It also introduced the world to a bevy of up and coming young actors, from Ryan Gosling (The Tale of Station 109.1) and Elisha Cuthbert  (The Tale of the Night Shift) to Neve Campbell (The Tale of the Dangerous Soup), the latter two who would eventually go on to establish themselves as scream queens of the slasher sub-genre.

Here, I’ll be igniting the campfire and revisiting the frightful stories that helped pave the way for my own horror obsession, taking a look at how scary they really are. I’ll also be revealing, to the best of my knowledge, the horror references that lay waiting within each episode. But don’t worry, there’s a bathroom break for everyone, packed with a spooky 90’s commercial that’s sure to rekindle your horrific infatuation with nostalgia.

The Tale of the Phantom Cab

Plot: Siblings Denny Crocker (Jason Tremblay) and his nerdy brother Buzz (Sean Ryan) are lost in the woods after a magnetic interference with their compass (who knew?). Luckily they run into Flynn (Brian Dooley), an innocuous hiker who in true How to Catch a Predator fashion, takes Denny and Buzz to see a strange man in an isolated cabin named Dr. Vink (series regular Aron Tager), a scientist with a penchant for riddles and amputated body parts. He asks one riddle: “What’s weightless, can be seen by the naked eye, and if put into a barrel, will make it lighter?” If they get it right, they can use his phone. If not, they’ll be forced out into the dead of night where a mysterious taxi cab roams the woods in search of wayward travelers. Can Denny and Buzz solve Dr. Vink’s riddle before it’s too late, or are they doomed to take a ride in the Phantom Carriage?

Are You Afraid: Admittedly, the very first episode is a bit of a tame one, and for a show premiering on Halloween, it would have been fun to have its introduction be centered around everyone’s favorite horror holiday. Still, the idea of being lost in the woods will always tap into our deepest fear, which The Tale of the Phantom Carriage does so like Fred Astaire on adderall. It’s an atmosphere laden episode that generates creeping fog from nothing, reminding us that maybe you shouldn’t talk to strangers in the middle of the woods at night. Oh, and hermits who look like a cross between Manson and Hagrid who foster a fondness for riddles and stealing human body parts? Terrifying.

Horror Nods: The title pays homage to the 1921 Swedish silent film The Phantom Carriage, which features the spirit of a man traveling in a carriage, picking up the souls of those who died that year. Here, roaming the woods is an old beat up yellow cab in the vein of Richard Donner’s 1988 film Scrooged, a seasonally grimy adaptation which shows Bill Murray’s titular character the error of his ways. And where would Dr. Vink’s backwoods shanty be without the horror soaked fairy tale Hansel and Gretel, published in 1812 by the Brothers Grimm’s that saw a haggard, cannibalistic witch lure two lost siblings into her candy constructed cabin? Dr. Vink may not have much of a sweet tooth, but he does tempt his guests with tea.

The Tale of Laughing in the Dark

Plot: While attending an amusement park, Josh (Christian Tessier), Weegee (Daniel Finestone) and his little sister Kathy (Tamar Kozlov) discover a clown adorned funhouse called Laughing in the Dark; an attraction supposedly haunted by a cigar chomping clown named Zeebo (once again, Aron Tager). Too scared to enter, the three friends learn that the funhouse originally burned down with Zeebo inside due to a lit cigar after stealing $4,000 from the circus. Determined to prove he isn’t afraid and that it’s all just a ghost story, Josh enters the funhouse alone and steals Zeebo’s clown nose to prove it. Shortly after, Josh is harassed by menacing phone calls accompanied by the faint smell of cigars, and must confront his fear, or die laughing.

Are You Afraid: That really all depends on your tolerance for the giggling and grinning carnival performers that have been terrorizing kids since forever. While the episodes titular funhouse might be claustrophobic and spooky, its atmosphere is hardly the thing of nightmares. No, that comes with Zeebo, who brings with him cheap cigar smoke that moves like suffocating fog as he essentially stalks Josh, and it can be effectively creepy when left alone in an empty house. Still, the shows 2nd episode feels very much like a warm-up, testing its wiggle room with how dark it can go with younger audiences.

Horror Nods: While much more kid friendly, the titular sideshow attraction pays a less grimy and perverted nod to Tobe Hooper’s continually under-appreciated 1980 carnival slasher Funhouse, which sees a group of teens try and survive the night within the walls of a dementedly eerie spook-house. Instead of a deranged family though, Josh is haunted by a clown that parallels the child-snatching doll from Poltergeist, and inside a distorting mirror, Zeebo can be seen mimicking the clowns from director Victor Salva’s 1989 debut, Clownhouse. There’s even a scene involving a balloon that, while not filled with blood, conveys a dire message for Josh that evokes the playful menace of 1990’s mini-series, It.

The Tale of the Lonely Ghost

Plot: With her parents away for the summer, Amanda (Laura Bertram) is forced to stay with her Aunt Dottie (Pauline Little), her brattish daughter Beth (Laura Levin) and their nanny (Sheena Larkin), an older woman who is left mute after a tragedy next door. Afraid of spending the summer alone and hoping to be a part of Beth’s group, Amanda partakes in their initiation, which requires her to spend the night in a supposedly haunted bedroom of the neighboring house. That night, she’s confronted by the ghost of a little girl who was bullied and left locked in her closet to die, whose only cry for help is the message “Help Me” written backwards on the wall. Now, it’s up to Amanda to heed the girls plea and confront a terrifying truth.

Are You Afraid: A little girl is bullied to the point of being forced into a small closet where she starves to death, only to haunt the room in hopes of finding the help she needs. Whether or not you think a maleficent presence lurks within little kids (or that they’re inherently evil), the central conceit is nevertheless unsettling and immensely sad. This is an episode that feels much more powerful than it does scary, touching on themes of hope and acceptance, and while there are very few moments of genuine terror – unless of course you have an aversion to ghastly pale children – it remains a tragically haunting episode that lingers well after the fire is doused.

Horror Nods: Loosely referencing the title of Walt Disney’s 1937 Mickey and friends cartoon Lonesome Ghosts, in which a trio of lonely spirits hire ghost exterminators in hopes of alleviating some boredom in their lives, The Tale of the Lonely Ghost pays most of its respect to Stanley Kubrick’s The Shining, in which the lipstick scrawled warning of “redrum” by gifted Danny Torrance mirrors the ghostly girls cry for help. There’s also Amanda’s cousin Beth who becomes trapped in the closets mirror, much like Princess Ozma from Return to Oz, who requires rescuing from a young Fairuza Balk in what many consider to be one of the most terrifying kids films ever made.

And now for a commercial break…

Remember the Putterman’s? Neither did I (trauma works in mysterious ways), but I’m sure if you saw their rubbery, animatronic faces than the nightmares would come rushing back. They were Duracell’s answer to the drumming Energizer bunny, and boy did the company decide to take the road less traveled. Each member of the family – fitted with a giant Duracell battery in their backs – looks as if someone covered up the Ark of the Covenant halfway through it melting their face off. And like many commercials in the 90’s, it’s an exercise in warping the line between weird and straight up worrisome. See for yourself! 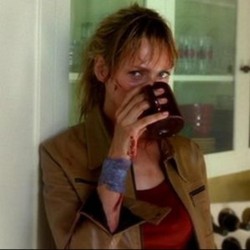